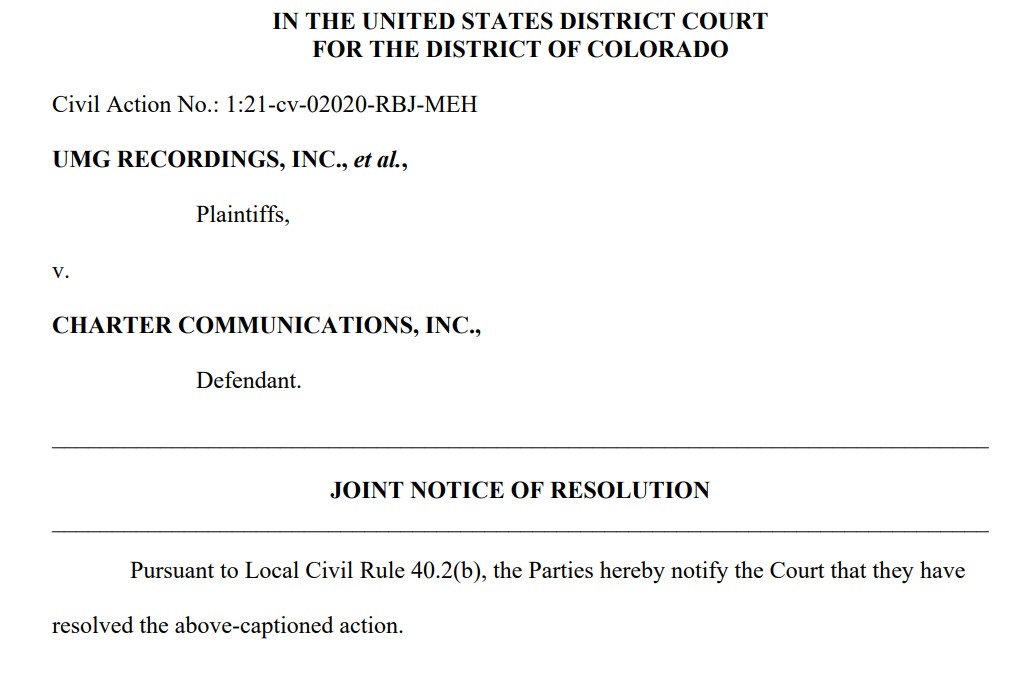 Charter Communications and several major record labels have settled their lawsuits over the ISP's handling of repeat copyright infringers. The deal was signed around the same time that the ISP's daughter company Bright House settled its case. No further details are available but with hundreds of millions of dollars in damages at stake, negotiations must have been tough.

In March of 2019, several major record labels sued Charter Communications, one of the largest Internet providers in the US with 26 million subscribers.

Helped by the RIAA, Capitol Records, Warner Bros, Sony Music, and other music companies accused Charter of deliberately turning a blind eye to its pirating subscribers.

Among other things, they argued that the ISP failed to terminate or otherwise take meaningful action against the accounts of repeat infringers, even though it was well aware of them. As such, the music companies said Charter was liable for both contributory infringement and vicarious liability.

The lawsuit was followed by another complaint last year alleging that, despite repeated warnings, the ISP was still failing to take action against pirating subscribers. This new lawsuit covered the infringements that took place after the first case was filed.

“Charter has insisted on doing nothing — despite receiving thousands of notices that detailed the illegal activity of its subscribers, despite its clear legal obligation to address the widespread, illegal downloading of copyrighted works on its Internet services, and despite being sued previously by Plaintiffs for similar conduct,” the music companies wrote.

The stakes are high in these cases as damages can easily reach hundreds of millions of dollars. This isn’t just a theoretical figure either, as a jury previously ordered rival ISP Cox Communications to pay a billion dollars in a similar case.

Adding to Charter’s trouble was the fact that its daughter company Bright House Communication was also sued separately. This case was scheduled to go to trial but was settled at the last minute, as reported earlier this week.

As it turned out, Bright House wasn’t alone in settling its dispute with the labels. Around the same time, Charter also reached an agreement with the music companies, settling both cases on undisclosed terms. This means that three high-profile piracy liability lawsuits were resolved in one week.

There is not much information available on the terms or the reasons for the settlements. The court filings are rather brief and simply notify the court that a deal has been reached, which is required under the court’s local rules.

“Pursuant to Local Civil Rule 40.2(b), the Parties hereby notify the Court that they have resolved the above-captioned action,” both parties write.

We reached out to Charter to find out more about the reasons for and conditions of the settlement but the company did not reply. The RIAA previously informed us that it is unable to comment on this particular matter.

Absent a last-minute breakthrough, it seems plausible that Bright House and Charter have agreed to pay a settlement fee to get the cases over with. However, this can’t be confirmed based on information that’s available to the public at this time.

If any new information surfaces, we will update this article accordingly. The settlement notifications in both Charter cases are available here (1/2).