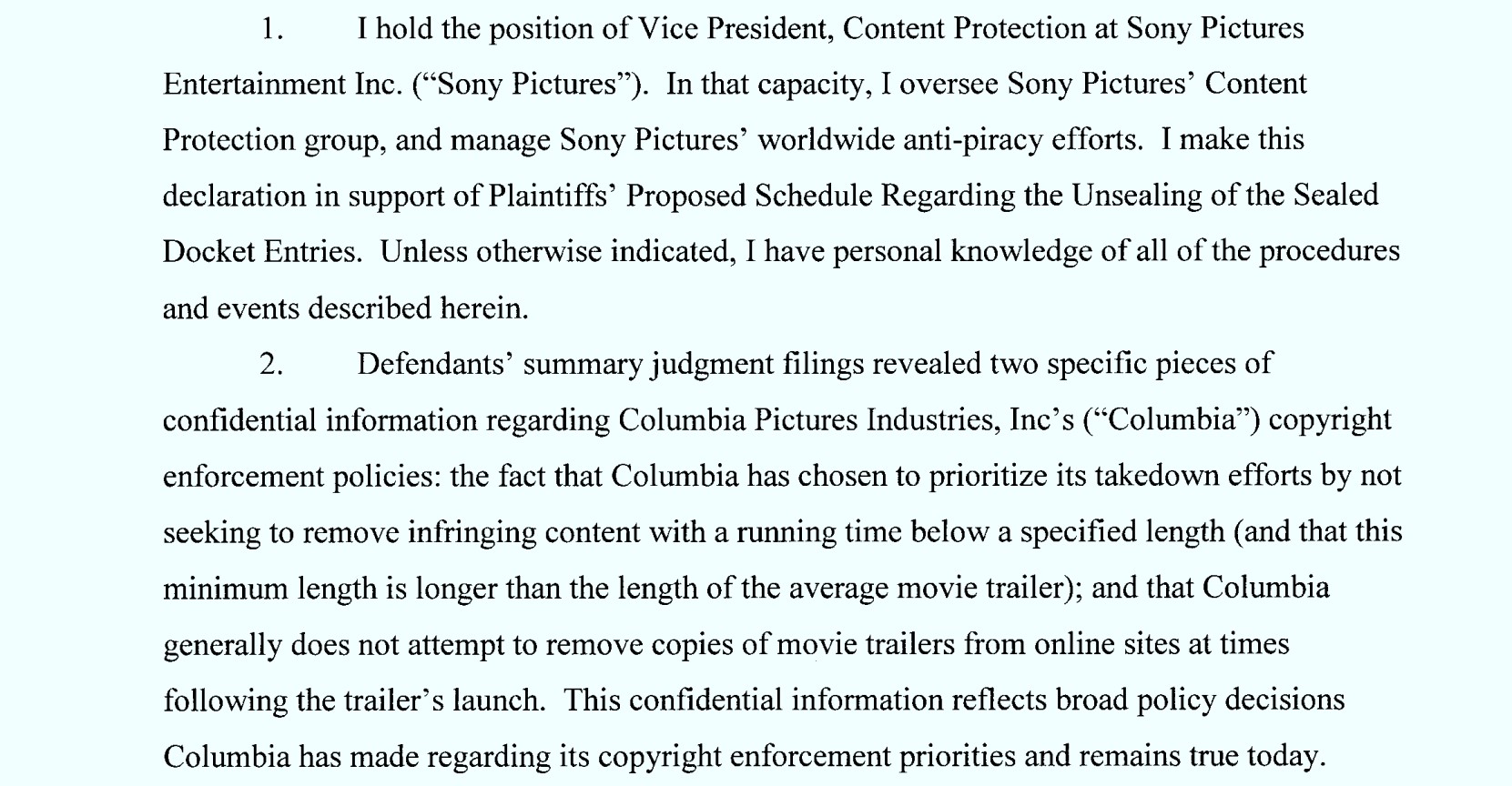 In the wake of the Hotfile lawsuit, the Motion Picture Association asked the court to keep some anti-piracy information forever out of the public eye. That was too long for Judge Williams who, after a slight delay, unsealed the contested documents last week. Among other things, the information reveals that for infringing video content to be flagged, it must exceed a certain duration.

Nearly a decade has passed since the legal battle between Hotfile and the Motion Picture Association (MPA) was put to rest.

At least on paper, the file-sharing service agreed to pay $80 million, but negotiated a much lower damages amount behind the scenes.

After the lawsuit ended, several movie studios asked the court to keep sensitive records under seal. Through the MPA, Columbia Pictures requested that certain sensitive documents should be sealed indefinitely.

“Defendants have cited two specific pieces of information regarding Columbia’s enforcement policies that, if revealed to the public, could compromise Columbia’s ability to protect its copyrighted works,” the MPA’s lawyers wrote at the time.

The MPA and Columbia hoped to keep the information secret forever, but the court didn’t want to go that far. In an order released in 2015, Florida District Court Judge Kathleen M. Williams ordered the information to be kept under seal for ten years.

This ten-year period started when the complaint was filed and officially ended last year. However, when we looked at the docket earlier this month, the information was still under seal. After contacting the court, it appears that this was an oversight so the records were made public shortly after.

Initially, this didn’t provide much information. Many of the unsealed documents are heavily redacted and according to the court, these redactions will stay in place.

Ironically, the anti-piracy secrets were revealed through the original request to keep the information sealed, including testimony from Sean Jaquez, Vice President Content Protection at Sony Pictures, the parent company of Columbia.

1. Columbia’s decision not to remove infringing content with a specified running length under a minimum threshold. This threshold is longer than the average movie trailer.

2. Columbia’s policy not to send takedown requests for copied movie trailers, despite the fact that these are often copied without permission.

According to Jaquez, these policies would likely stay in place indefinitely. And indeed, if we look at YouTube today, there are plenty of channels that repost trailers without running into trouble.

Pirates Could Break Up Videos

While these are not the most spectacular anti-piracy secrets, Columbia feared that people would take advantage should the information enter the public domain.

“For example, a potential infringer armed with knowledge about Columbia’s ‘minimum length’ criterion could carry out infringement in a manner that circumvents that limit, such as by breaking up a single infringing work into multiple shorter sections, each too short individually to trigger a takedown notice,” Jaquez told the court.

Indeed, it wouldn’t be hard to generate a YouTube playlist for a film, which simply breaks up the video into several parts.

The declaration doesn’t specify what the “minimum length” is, nor do we know whether other Hollywood studios have the same policies. However, looking at the many popular “movie summaries” compilations on YouTube, they tend to be quite lenient.

That said, these admissions don’t give the public any rights or assurances. Columbia and other movie studios can change their policies in a heartbeat.

Also, not all countries and rightsholders treat these issues equally. Just a few months ago, three uploaders of movie summaries received suspended jail sentences from a Japanese court.

A copy of the unsealed declaration of Sean Jaquez, in support of the ‘indefinite’ sealing request, is available here (pdf)